TradeMachine Pro is the options trading software and option backtesting tool that every professional trader would rather you don’t see. 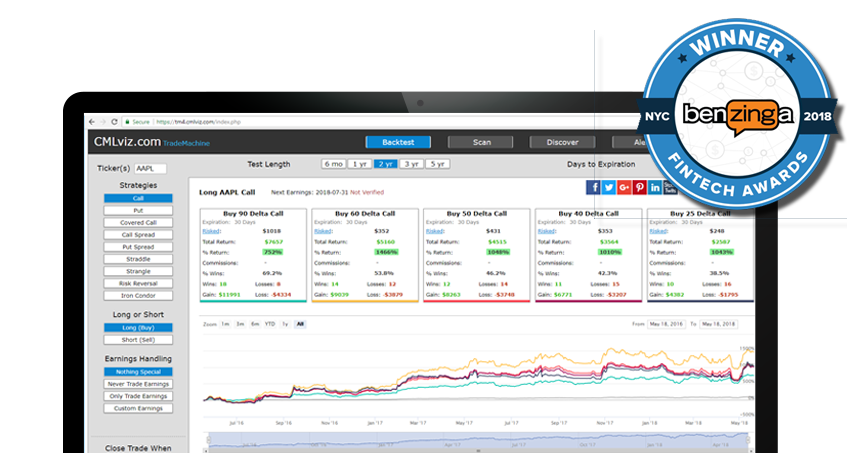 Discover
Get options trading ideas from the experts at Capital Market Labs right in your TradeMachine PRO dashboard. Save days and weeks of research with solid, well-researched trades that you can't get anywhere else.
Scan
The CML team creates dozens of options trading strategies, and the software runs them daily against all of the stocks in the market. Sort and filter backtest results, and see when the next earnings event is coming up.
Backtest
Enter 1-5 stock tickers, and set a backtesting timeframe and options expiration period. Get strategies, earnings handling, and technical signals that narrow your trades down to only the best-performing options.
Get Alerts
Never miss a trade opportunity again with TradeMachine PRO notifications. Get custom text and/or email alerts for specific technical indicators, earnings dates, and more, delivered to your phone or your dashboard.
SEE TRADEMACHIINE PRO IN ACTION

Get Options Trading Strategies from The Experts 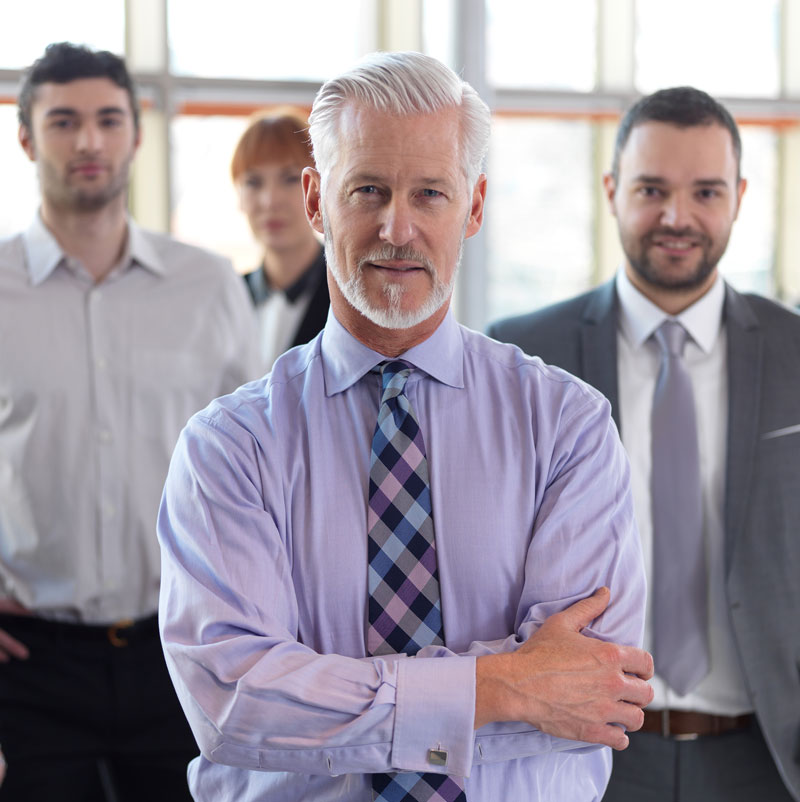 With informed, science-based research, now it's easy to trade options like a professional.

"Thank you so much. This is the coolest site I've ever seen. I have been trading futures, options and stocks since 1995 and have never seen something close to this."

"Less than 2 weeks ago I bought 2 calls each with both January and March expirations. Well, today alone, those calls are up almost $1,200. Combined, they are averaging just over 100% profit. I can't say enough how much you have changed my perspective on trading.

We Are All Traders
We are all looking for opportunity.
We're the "anti-institution" solution.

As a member of the famed Thomson Reuters First Call, our research sits next to Goldman Sachs, JP Morgan, Barclays, Morgan Stanley and every other multi billion dollar institution. But while they pay upwards of $2,000 a month on their live terminals, we level the playing field and bring day traders the same technology for much, much less.

If for any reason, you are not completely satisfied, let us know within 30 days of purchase and we will refund you 100%.

Money Back Guarantee
No Questions Asked. It's That Easy.

Get Institutional Caliber Research and Profit From Trades Like These Every Day: 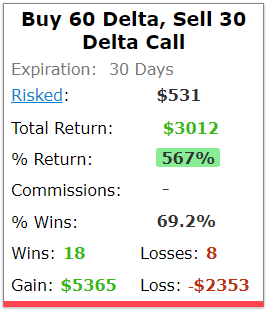 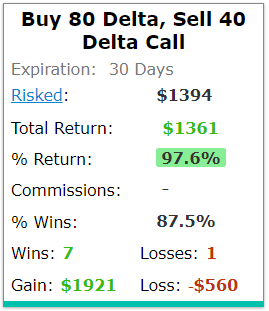 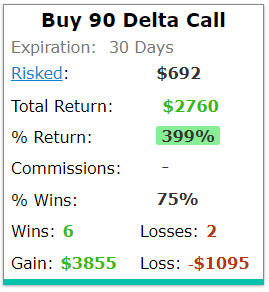 Get our thoroughly researched top picks from stocks like BAC, AAPL, and NFLX, as well as ETFs like SPY, XLU and even the famed VXX.

The software does the heavy lifting.

Get 3-10 new trade analyses, set-ups and ideas that are meant to further your knowledge of trading and keep you apprised of what’s happening in the market — from mega cap tech stocks to utilities, industrials, ETFs and indices.

This time-sensitive promotion lets you lock in your pricing of TradeMachinePro for life. As a way of saying thanks, we'll include more than a dozen trade set-ups in your welcome email so you can hit the ground running.

Finally, a backtesting tool you can count on.

The options backtesting tool is one of the most powerful features of TradeMachine Pro. Enter 1 to 5 stock tickers, a time frame for backtesting, and an option expiration date, then watch our options trading software do the analysis.

​ Viewing different strategies, earnings handling, and technical signals that help narrow down your trades to only the most profitable, solid performing options. 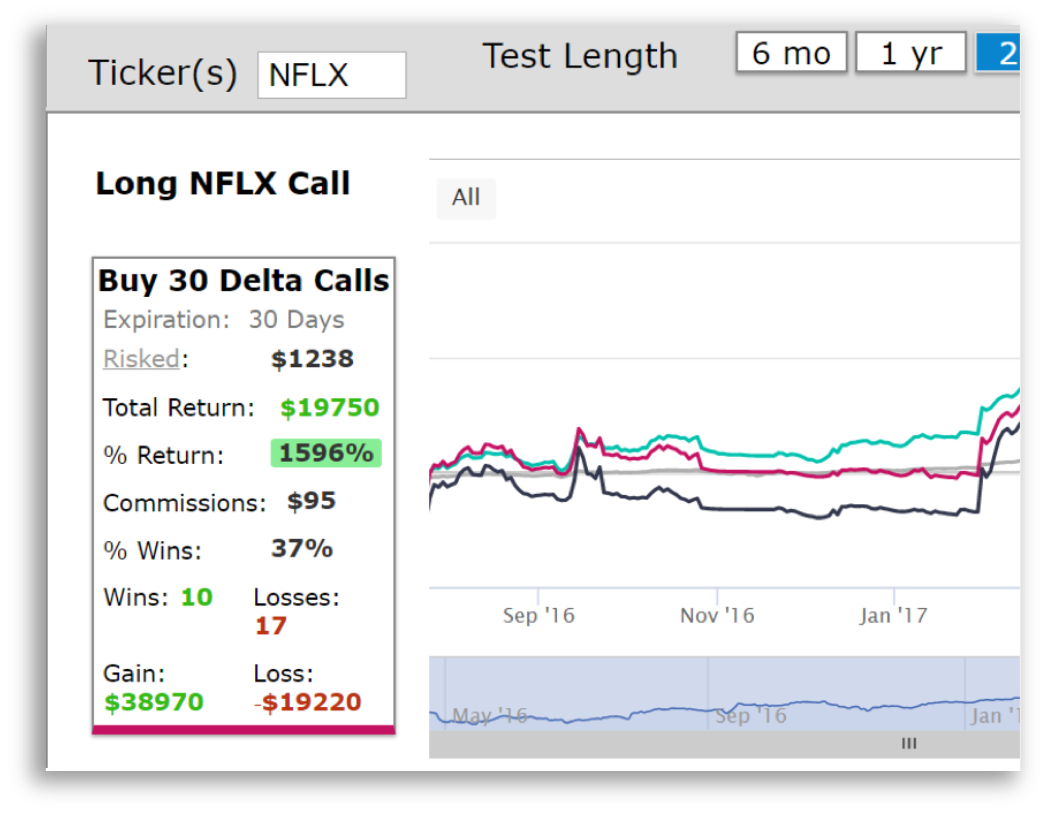 We've Brought In The Big Guns 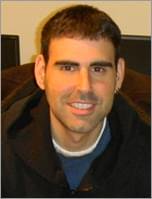 As one of the most influential options traders in today's market, we could devote a whole website to Ophir's credentials!

Not only is he one of the earliest scientists to identify deep learning, and in particular, neural networks, as a novel approach to examining financial markets.

Mr Gottlieb’s mathematics, measure theory and machine learning background stems from his graduate work in mathematics and measure theory at Stanford University and his time as an option market maker on the NYSE and CBOE exchange floors. He has been cited by various financial media including Reuters, Bloomberg, Wall St. Journal, Dow Jones Newswire and through re-publications in Barron’s, Forbes, SF Chronicle, Chicago Tribune and Miami Herald and is often seen on financial television. 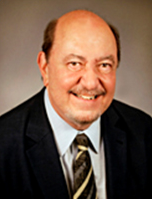 Mr. Kaplan is a founding director of MarketWatch, and is widely recognized as one of the grandfather’s of modern portfolio theory.

For the past 20 years, James Kaplan’s research interests and entrepreneurial ventures have focused on innovations designed to improve the predictive and explanatory power of classical finance theories and portfolio management philosophies.

Before he co-founded CML, Mr. Kaplan as Vice Chairman and Chief Executive of GMI Ratings (now part of MSCI). In this role, Mr. Kaplan developed novel risk modeling methodologies to help capital market participants mitigate the impact of what he has dubbed “routine anomalies”. The term refers to high-impact events stemming from variables typically overlooked in classical economic theories. 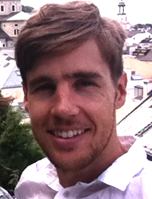 Jason Hitchings is the Chief Technology Officer at CML. He has diverse background in software engineering, product development, data visualizations as well as numerical analysis and real-time algorithmic option pricing.

He was the lead developer and product manager that led to one of the first ever SQL databases that updated asset prices in real-time; an accomplishment at the time that was considered by many in the industry to be impossible but is now common place in all of the exchanges and major banks in the world. Jason’s experience includes Head of Product at data visualization firm, Quid, the co-founder and lead engineer of financial analytics firm and broker-dealer, Livevol, Inc. Jason has also worked as the lead software engineer on Lockheed Martin’s Joint Strike Fighter Autonomic Logistics team. 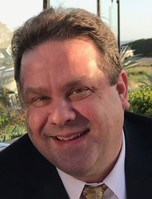 As Director of Quantitative Research for Audit Integrity (now part of MSCI) Tom applied predictive analytic techniques to model accounting fraud and securities class action litigation. Mr. White led the Analytic Science team at KUITY in ground breaking work applying ‘Big Data’ techniques to the field of philanthropy, ultimately resulting in the creation and spinoff of Posiba, Inc. As a consultant at First USA Bank, Mr. White’s team was an early analytics adopter, using predictive models to optimize marketing efforts, increasing profits from 3rd party products by over 250% in just 24 months. He is considered an expert at options trading software.

The information contained on this site is provided for general informational purposes, as a convenience to the users. The materials provided and results generated by the software are not a substitute for obtaining professional advice from a qualified person, firm or corporation. Consult the appropriate professional advisor for more complete and current information. Capital Market Laboratories ("The Company") does not engage in rendering any legal or professional services by placing these general informational materials on this website. The Company specifically disclaims any liability, whether based in contract, tort, strict liability or otherwise, for any direct, indirect, incidental, consequential, or special damages arising out of or in any way connected with access to or use of the site, even if we have been advised of the possibility of such damages, including liability in connection with mistakes or omissions in, or delays in transmission of, information to or from the user, interruptions in telecommunications connections to the site or viruses. The Company make no representations or warranties about the accuracy or completeness of the information contained on this website. Any links provided to other server sites are offered as a matter of convenience and in no way are meant to imply that The Company endorses, sponsors, promotes or is affiliated with the owners of or participants in those sites, or endorse any information contained on those sites, unless expressly stated.